On 7 May 2015, at the meeting of the Parliamentary Minority with the new cabinet of the Government

On 7 May 2015, at the meeting of the Parliamentary Minority with the new cabinet of the Government of Georgia, member of the United National Movement, Giorgi Vashadze, raised the issue of the depreciation of GEL. Mr Vashadze stated: "Are not you ashamed to lie and say that the GEL crisis is caused by regional problems? UAH appreciates in Ukraine and RUB appreciates in Russia but in Georgia, the GEL continues to fall. Now, this is a problem."

took interest in the accuracy of the MP’s statement.

The GEL exchange rate has been under special scrutiny since November 2014 when in the course of one month the national currency of Georgia depreciated by GEL 0.15 (8.6%) against USD and after another wave of depreciation in February 2015, it crossed the 2.2 margin. After a short-term appreciation, GEL continued to depreciate. The ruling party names external factors and the situation in the region as the causes behind the depreciation of GEL.

Georgia uses a floating currency exchange regime. This means that the currency exchange rate is regulated by the supply and demand mechanism for USD. Since the end of the last year up until the present day, the principal cause behind the fall of the GEL exchange rate has been the decreased inflow of USD to Georgia (rising current account deficit, decreasing remittances, reduced amount of income from tourism, etc.). At the same time, the GEL exchange rate is negatively affected by the decrease in the economic growth rate. At certain periods, the inflated amount of GEL had a negative impact upon the GEL exchange rate as well. For example, the amount of national currency in circulation rose by GEL 214 million in December 2014 and the reserved amount of money rose by GEL 450 million. Deficit spending of the state budget has increased the supply of GEL and, therefore, had a partial impact upon the depreciation of GEL as well. The depreciation of GEL against USD is caused by both domestic and external factors. FactCheck has already written

about the causes of the depreciation of GEL before.

UAH more or less resembles RUB when it comes to the exchange rate dynamics against USD. Until the end of the second quarter of 2014, the USD to UAH exchange rate fluctuated in the margin of 11. However, since the beginning of August 2014, UAH depreciated against USD by UAH 2 and the exchange rate stood at 13. The next wave of depreciation became evident at the beginning of November 2014 and reached its peak on 26 February 2014 (USD to UAH stood at 30). Beginning from March 2015, UAH started to appreciate sharply against USD and as of 7 May 2015, USD to UAH stood at 20.6 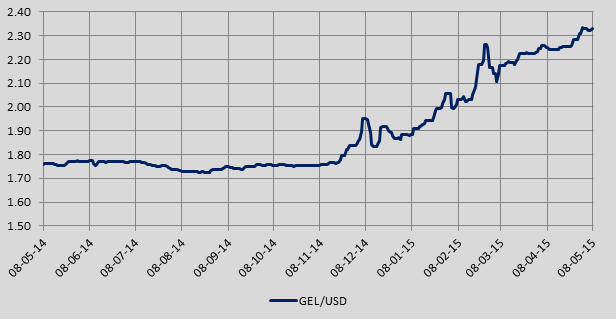 It must be noted that even though USD stopped appreciating worldwide, GEL continues to depreciate against USD. Moreover, USD has started to depreciate. The USD exchange rate index

fell by 4.5% in the last two months whilst the Government of Georgia and a portion of economics commentators have named the worldwide appreciation of USD as the cause behind the depreciation of GEL.

The depreciation of GEL against USD, in addition to external factors, was largely caused by the mistakes made in the domestic economic policy (high deficit of the budget, uneven spending of the budget, tightening of visa regulations, imposing stricter regulations or talk about imposing stricter regulations, effectively banning foreigners from purchasing land plots, increased bureaucracy, etc.). Since 19 November 2014 (USD to GEL exchange rate at 1.76), GEL has depreciated against USD by GEL 0.6 and contrary to UAH and RUB continues to depreciate in the last months as well. Even though neither of these two foreign currencies has come to their initial exchange rate, they maintain an appreciation trend after they reached the peak of their depreciation.

Additionally, the USD global appreciation trend has been reversed during the last two months. Therefore, GEL depreciates even against the background of a depreciating USD.