“According to the recent survey by the Heritage Foundation, Georgia ranks 22nd in the world by economic freedom… The same ranking places Georgia 12th among the 43 countries of Europe.”

On 21 May 2014, Prime Minister Irakli Gharibashvili gave a speech at the Harvard Club. The Prime

Half True
The statement is partly accurate, but the details are missing or some of the issues are without context
Facebook Linkedin Twitter Print
On 21 May 2014, Prime Minister Irakli Gharibashvili gave a speech at the Harvard Club. The Prime Minister spoke about the improved economic situation in Georgia and focused upon tourism, the industrial sector and investments and stated: “According to the recent survey by the Heritage Foundation, an analytical centre, Georgia ranks 22nd in the world by economic freedom as it has improved in six out of ten categories of economic freedom, including financial freedom, investment freedom, monetary freedom and property rights. The same ranking places Georgia 12th

among the 43 countries of Europe.”

On 13 January 2015, whilst giving a speech at the opening ceremony of the Georgia-Estonia Business Forum, the Prime Minister repeated the same statement.

Founded in 1973, the Heritage Foundation is a research and educational institute. Its specific goal is to conduct qualified research on the main economic and political issues of the day for its target audiences (congress representatives, media, executive organs, etc.).

For 19 years, since Georgia’s Economic Freedom Index was first calculated, its score has improved by 28 points (it reached the maximum in 2014) which shows the third best progress of participating countries. The reason for this growth has mainly been the improving of the regulation system and the openness of the market. Moreover, important reforms have been carried out in trade liberalisation, the privatisation sphere, etc. In 2012, Georgia ranked 34th among 178 countries whilst it was promoted to the 21st

in 2013 is not the result of the new government’s efforts. Moreover, even though Georgia’s score in the Economic Freedom Index increased in the 2014 survey, it downgraded by one place in the ranking which means that other countries improved their economic freedom criteria to a greater degree.

The Heritage Foundation prepared a separate report about Georgia’s Economic Freedom Index in 2014. According to the information on page 1 of this report, Georgia received 72.6 points out of 100 in the 2014 Economic Freedom Index. With this Index rating, it ranks 22nd in the world and 12th

in Europe. This information matches that voiced by the Prime Minister.

According to the same report, the 2014 Economic Freedom Index (72.6 points) is 0.4 of a point higher than last year’s Index. As for the categories themselves, Georgia improved not in six but in five out of ten. The country regressed significantly in terms of private property freedom, underlined by the Prime Minister, and downgraded from 45 points to 40.

According to the above table, the property rights index degraded by five as compared to the previous year whilst the public finance management index remained the same.

Moreover, it should be considered that success in the Index is reflected not in the component scores but in the position of the country and its annual progress. In terms of this, Georgia downgraded in eight out of ten components in the 2014 Index. Georgia improved only in two components:  monetary freedom and investment freedom.

For additional information, we reviewed the 2013 data together with that of 2014. 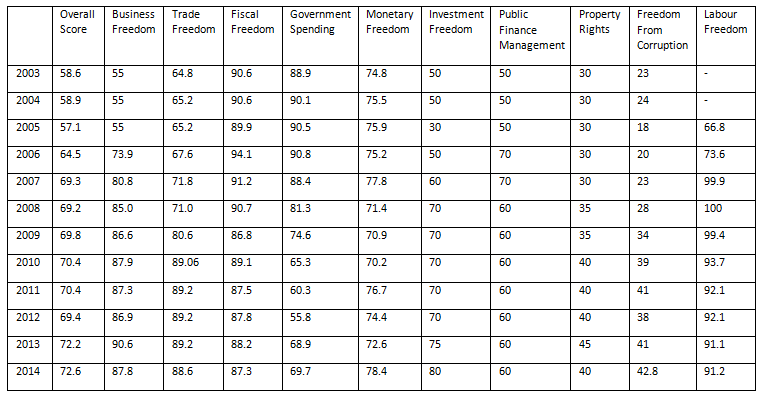 Conclusion In the process of verifying the Prime Minister’s statement, it turned out that according to the Heritage Foundation report, Georgia received 72.6 points out of 100 in the 2014 Economic Freedom Index. With this score, it ranks 22nd in the world and 12th

in Europe although it downgraded by one position as compared to 2013. By its ranking, Georgia lagged behind other countries in eight out of ten components which means that other countries are carrying out their reforms faster or more effectively and are more successful in enhancing the quality of their economic freedom.

Moreover, according to the information in the same report, Georgia’s 2014 Economic Freedom Index score (72.6) is more than last year’s score by 0.4 of a point. However, five and not six components have improved.

Mr Gharibashvili describes the factual data more or less accurately; however, he emphasises not the position of Georgia with respect to the other countries but the scores of the Index components when stating that Georgia has improved in six out of ten components. Such a comparison is not enough because the main aim of the Economic Freedom Index is to compare countries by economic freedom. Looking at the 2014 data, we can say that the Government of Georgia has been unsuccessful in conducting a policy oriented on economic freedom as since 2013, we have lagged behind other countries by one place.

Therefore, FactCheck concludes that Mr Gharibashvili’s statement is HALF TRUE. Editor’s note: The initial version of this article, under the authorship of FactCheck analyst, Nutsa Tokhadze, was published on 30 June 2014. As noted above, on 13 January 2015, the Prime Minister mentioned the results of the survey conducted by the Heritage Foundation for the second time and repeated the statement he made last year. After the consequent statement, FactCheck returned to the issue. The research showed that the initial version of our article did not analyse the components of the survey and Georgia’s results in each of them thoroughly enough. Because of this, we studied the issue additionally and updated the article. Moreover, based upon the information acquired from the analysis of the research components, FactCheck’s verdict has been modified as well, assessing Irakli Gharibashvili’s statement as HALF TRUE instead of MOSTLY TRUE.