took interest in the Prime Minister's statement and verified its accuracy.

According to the World Bank's forecast, Georgia's economic growth rate should be 5% in 2014. The National Statistics Office of Georgia reports that the Georgian economy shrunk by 0.5% in November and as a result, its overall economic growth over 11 months added up to 5%.

Irakli Gharibashvili compared the growth of Georgia’s GDP to the same data of other countries and emphasised that Georgia has significantly higher growth rates than other strong economies of the world. It is worth noting that this kind of comparison is not fully appropriate as countries with more developed economies do not intend to reach high rates of economic growth. Moreover, these economies are saturated with capital, competition on the market is tough and, therefore, the return on capital is reduced. This dynamic works the other way around in developing countries. We should also take into consideration that the economic growth rates of the countries and the groups of countries named by the Prime Minister were low when speaking of percentages but looking at the absolute value, their growth is much higher than Georgia’s GDP growth. Georgia has a developing economy and its GDP in 2013 was USD 16.1 billion; therefore, a smaller increase of its value results in bigger changes in its percentage.

According to the figures from 2013, the GDP of the US was USD 16.8 trillion. This means that a 1% growth of the US economy increases the whole sum by USD 168 billion whilst a 1% growth of the Georgian economy is equal to a GDP increase of USD 161 million. A boost of the US economy by 2.2% leads to a growing GDP per capita by USD 1,150 whereas a 5% increase of the Georgian economy  would only add USD 180 to the annual income of the average Georgian.

In order to get a real picture we should compare Georgia’s economic growth rate with other developing countries. Comparing the rates with Russia and Ukraine, given the ongoing situation in these countries, is definitely wrong and does not enable us to make accurate conclusions. It is also very unclear according to which criteria the Prime Minister names Moldova and Armenia as having stronger economies than Georgia.

We analysed the economic growth rates of Eastern European and Central Asian countries as well as the members of the Commonwealth of Independent States (CIS). Please see the chart below. 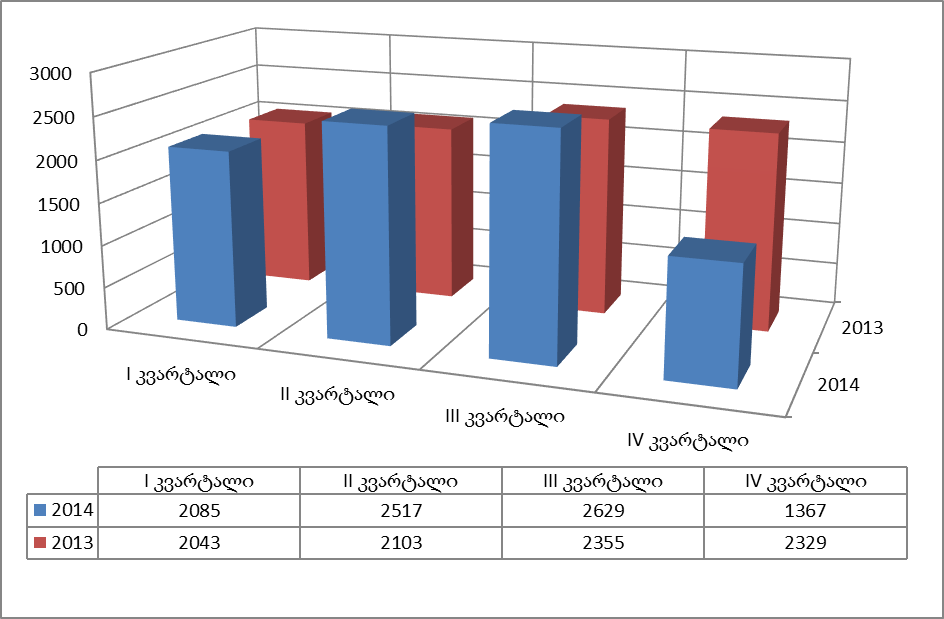 We compared the rate of Georgia’s economic growth with the same statistics of the countries of Eastern Europe, Central Asia and the Commonwealth of Independent States according to the World Bank forecast figures. It turned out that Georgia is behind Turkmenistan, Uzbekistan, Kyrgyzstan, Tajikistan, Azerbaijan and Kazakhstan whilst Armenia and Georgia have similar rates of economic growth.

Evaluating the 11-month statistics, the growth of Georgia’s GDP for 2014 is 5%. It is highly anticipated that the overall growth of the Georgian economy will be around 5% in 2014 (statistics on the economic growth of 2014 will be published by the National Statistics Office of Georgia in March of this year).

Irakli Gharibashvili compared the growth rates of the Georgian economy with the economic growth of developed countries. This kind of comparison is inappropriate because it is very difficult for developed countries to achieve high percentage figures of GDP growth. For getting an accurate picture, economic growth rates should be compared to the statistics of other developing countries. In the list of Eastern European and Central Asian countries, Georgia is in the 7th place whilst ranking 49th

among the 152 developing countries of the world.

Despite the fact that Irakli Gharibashvili presented the statistics more or less accurately, he made wrong comparisons and exaggerated Georgia’s GDP growth. Furthermore, he did not mention the decrease in Georgia’s economic growth in the last months of 2014. Therefore, FactCheck concludes that the Prime Minister's statement is MOSTLY FALSE.