“Teachers’ wages have been raised and tens of millions of lari have been allocated for the construction and repairs of school buildings.”

On 4 June 2014, the Prime Minister of Georgia, Irakli Gharibashvili, met with representatives of

True
The statement is accurate and nothing is missing
Facebook Linkedin Twitter Print
On 4 June 2014, the Prime Minister of Georgia, Irakli Gharibashvili, met with representatives of the media. During the press conference the Prime Minister talked about the reforms in the educational system, focusing his attention upon teachers’ wages and the construction and repair of schools. He stated:  “Teachers’ wages have been raised and tens of millions of lari

have been allocated for the construction and repairs of school buildings.”

took interest in the Prime Minister’s statement and verified its accuracy.

In order to request information about teachers’ wages and funds allocated for the construction and repairs of school buildings, we sent an official letter to the Ministry of Education and Science of Georgia. We received the requested information about schools on time; however, the information about wages took one month to arrive.

According to the Ministry of Education and Science of Georgia, the secondary education facilities in Georgia are legal entities of public law. According to the Directive of the Government of Georgia on the Allocation of Normative Financial Resources and the Respective Vouchers for Funding the Secondary Education of a Student, secondary schools are entitled to monthly funding (each secondary school receives a voucher for each student). Within the boundaries of governmental funding, the administration of a secondary school then pays wages to the employed teachers. The calculation of the teachers’ wages is based upon the 21 October 2005 Directive No. 576 of the Minister of Education and Science of Georgia on the Approval of the Instructions about the Conditions and Amount of the Wages of Secondary School Teachers. The Directive regulates the norms and conditions for the calculation of teachers’ wages.

Before we examine the issue of the increased wages, let us look into the mechanisms of the distribution of wages and surpluses for secondary school teachers.

The aforementioned Directive determines that the payments to teachers include the salary and the surpluses as well.  Different kinds of surpluses can be distributed.

The calculation of salaries and surpluses for teachers is based upon the following criteria:  a) qualification of the teacher, b) pedagogical, scientific or creative activities in the higher, secondary or professional education facilities, c) workload and d) type of work.

The education and qualification of the secondary school teachers has five levels with respective coefficients to each level.

The work experience of a teacher is an additional factor in the calculation of the wages. The experience has three levels with respective coefficients assigned to each level:  a) up to five years – 0.2, b) from five to ten years – 0.5 and c) ten years or more – 0.6.

The surpluses to the wages are also calculated based upon the type of work done by the teachers. The workload is also a factor and there are three different types.

The final wages of secondary school teachers are calculated by the multiplication of the basic salaries to the coefficients of the aforementioned criteria. As for the growth of teachers’ wages, the Ministry of Education and Science of Georgia voiced 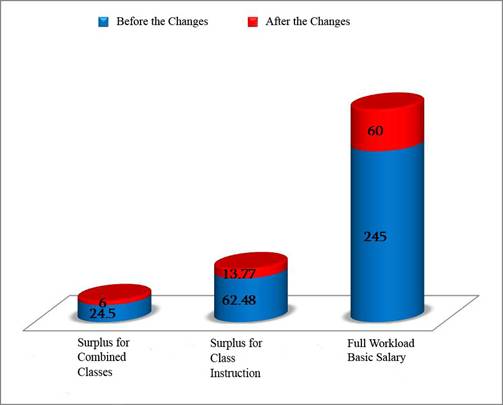 The 2014 annual budget of Georgia does not include the wage growth for secondary school teachers. However, according to the statement of the Minister of Education and Science of Georgia, Tamar Sanikidze, movement of a teacher to a higher category will have a direct influence upon his/her wage.

It should also be pointed out that the growth of secondary school teacher wages has happened step by step every year. For example, the full workload basic salary of a teacher was GEL 115 in 2005 while it amounted to GEL 220 in 2009. From 1 September 2009, the full workload basic salary increased from GEL 220 to GEL 245. The surplus for a class instructor also rose from GEL 27 to GEL 63.

As for the construction and repairs of school buildings, according to the data received from the Ministry of Education and Science of Georgia, the amounts of money assigned for this process upon a yearly basis was as follows (figures in GEL):

According to the Ministry of Education and Science of Georgia, the rehabilitation of secondary education institutions by the Educational and Scientific Infrastructure Development Agency (ESIDA) is a gradual process. The full rehabilitation process of schools may take several years. The statistics of the repaired school buildings from 2009 to 2013 are as follows:

The statistics of the construction of schools from 2009 to 2013 are:

According to the results of our study, the wages of secondary school teachers did indeed increase in 2013. The basic salary of teachers with a full workload increased from GEL 245 to GEL 305. The surplus of a class instructor increased from GEL 62.48 to GEL 76.25. The salary surplus for combined classes increased from GEL 24.5 to GEL 30.5. However, it should also be noted that the rise in teachers’ salaries is not planned in the annual budget of 2014. Another important point is that there was a trend of increasing teachers’ wages from 2005 to 2009 which grew from GEL 115 to GEL 245. The wage surpluses were also increased in these years.

The same is true about the construction and repairs of secondary education facilities. A large amount of money was allocated for this process from 2009 to 2013.

FactCheck concludes that Irakli Gharibashvili’s statement:  “Teachers’ wages have been raised and tens of millions of lari have been allocated for the construction and repairs of school buildings,” is TRUE.