“Only ten wheat processing enterprises are remaining from 80.”

On 16 January 2014, the Prime Minister, Irakli Gharibashvili, met with up to 150 representatives of

On 16 January 2014, the Prime Minister, Irakli Gharibashvili, met with up to 150 representatives of Georgian as well as foreign media and answered their questions. Discussing the changes introduced into the field of agriculture, the Prime Minister stated: “Only ten wheat processing enterprises are remaining from 80.”

took interest in the Prime Minister’s statement and verified its accuracy.

Aiming to obtain relevant information we addressed the Ministry of Agriculture. The Ministry provided a list of those “large wheat processing enterprises” which have been “steadily operating” on the market throughout the last years. 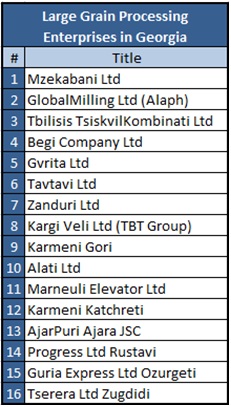 For additional information on the statistical data of the previous years, as advised by the Ministry of Agriculture, we addressed the National Statistics Office of Georgia.According to GeoStat, as of 2013, there were 73 operating enterprises in Georgia specialised in the production of cereal products and during the past ten years their number varied from 71 to 175. 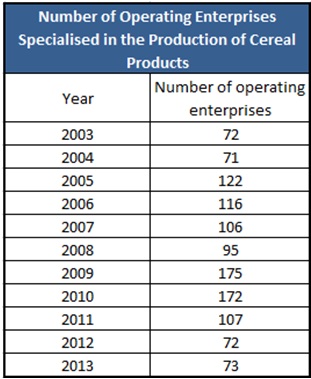 As we were informed by the Ministry of Agriculture, the difference between the figures of the two bodies can be explained by the fact that unlike GeoStat, the list provided by the Ministry mainly includes large enterprises of Georgia. In agreement with GeoStat’s definition, the enterprises are recognised as operating units based upon various criteria among which are the taxes paid throughout the year, distributed salaries and other indicators. Therefore, the list prepared by GeoStat includes all kinds of enterprises whose number may vary from year to year or even season to season. As clarified by GeoStat, the list of enterprises specialised in the production of cereal products is not limited to wheat processing enterprises but the office holds no data exclusively on these enterprises. 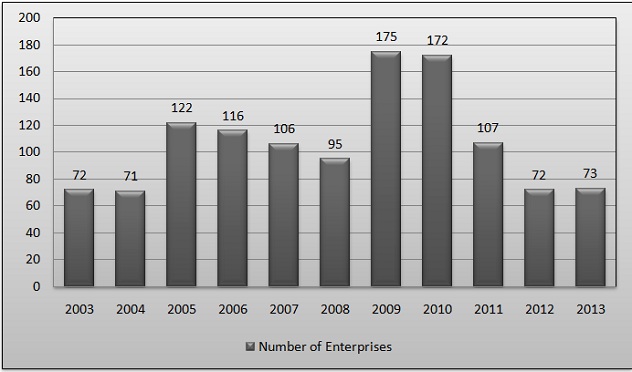 However, as of 2013, the number of operating enterprises producing flour totalled 54 of which, according to GeoStat’s classification, 21 were described as large, eight – as medium and 25 – as small. As we were told in the National Statistics Office of Georgia, flour producing enterprises are primarily focused on processing wheat with only a small portion of these working on producing corn flour. GeoStat, however, does not distinguish the two types of enterprises when collecting the data. 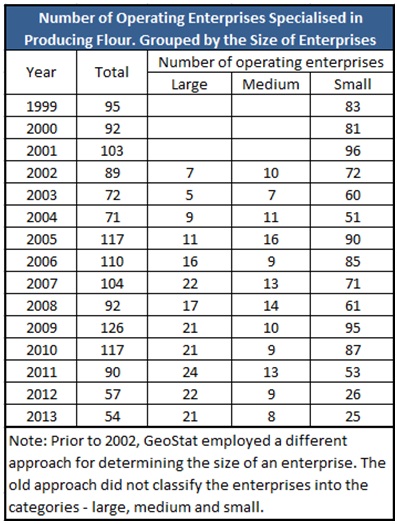 The graph below depicts the variation in the number of flour producing enterprises throughout the years 1999-2013. 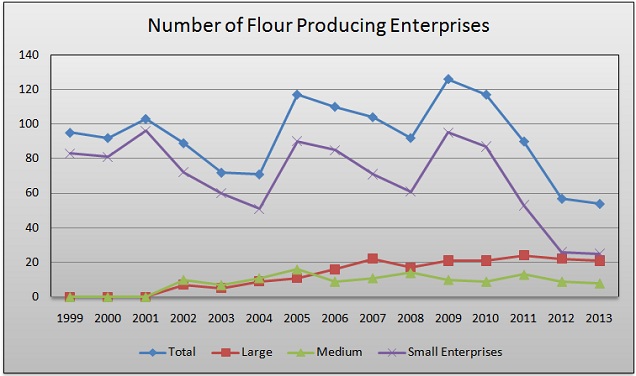 Conclusion In line with the information provided to FactCheck

Consequently, we conclude that Irakli Gharibashvili’s statement asserting that “only ten wheat processing enterprises are remaining from 80,” is HALF TRUE.