“Today, pensioners lose about GEL 12 a month from their pension of GEL 150. In a year, that almost adds up to their monthly pension.”

At the plenary session of the Parliament of Georgia held on 5 February 2014, the representative of

At the plenary session of the Parliament of Georgia held on 5 February 2014, the representative of the Parliamentary Minority, Zurab Japaridze, stated: “Today, pensioners lose about GEL 12 a month from their pension of GEL 150. In a year, that almost adds up to their monthly pension.”

Similar statements were voiced by other members of the United National Movement, Zurab Chilingarashvili and Akaki Bobokhidze.

“This is the first year when in the conditions of inflation,the pension was reduced by GEL 12-13.”

took interest in the abovegiven statements of the MPs conveying similar ideas.

We contacted Zurab Japaridze and tried to establish the methodology he employed for calculating the loss of GEL 12. As clarified by the MP, he compared the current GEL exchange rate (with respect to the USD) to the exchange rate of January 2013 and found a 12% difference between the two. 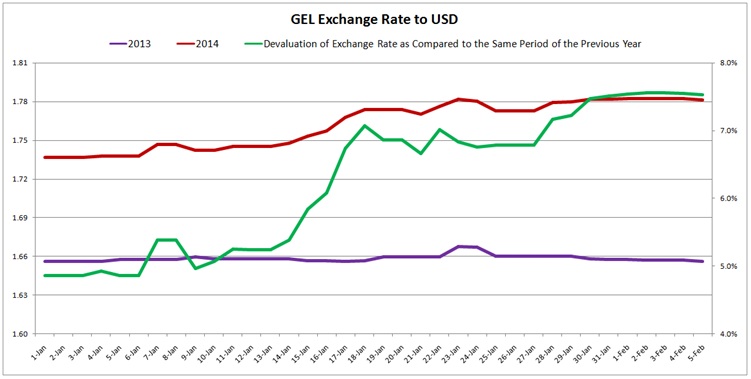 For calculating the loss induced by inflation, it is advisable to assess the rise registered in the Consumer Price Index (CPI) in January; that is, to examine to what extent the prices of different consumer goods rose in January – be it a rise prompted by the devaluation of the GEL, an increase in the price of imported products or as a result of any other factors.

As can be seen the rates of monthly and yearly inflation are not high enough to have caused as large of a loss for the pensioners as asserted by the MPs in the abovegiven statements. Based upon the rough calculations, in January 2014, a pensioner lost GEL 4.35 owing to inflation as compared to the same month of the preceding year (150*0.029) whereas as compared to December of 2013 the loss amounted to GEL 1.2 (150*0.008).

The statements voiced by the MPs Zurab Chilingarashvili and Akaki Bobokhidze are also undoubtedly inaccurate as they also point to an allegedly sizable loss in the pension prompted by inflation. The MPs might have made certain miscalculations but FactCheck

rates the accuracy of facts and the figures indicated by the MPs strongly diverge from the actual indicators.

took note of the part of Zurab Japaridze’s statement where the MP claims that the pensioners lose one month worth of their pension throughout the year. We found this assertion also to be misleading as the inflation rates of two months are not to be generalised onto the whole year. The shortcomings of the generalisation are exemplified by the fact that in the month of February the exchange rate of the GEL started strengthening relative to the indicator witnessed in January.

Bearing in mind the arguments laid out above, FactCheck rates the statement with its lowest gradation and concludes that Zurab Japaridze’s statement: “Today, the pensioners lose about GEL 12 a month from their pension of GEL 150. In a year, that almost adds up to their monthly pension,” is a LIE.