On 19 November 2013, the Prime Minister held a meeting with the Parliamentary Minority. Member of

On 19 November 2013, the Prime Minister held a meeting with the Parliamentary Minority. Member of the Minority, Givi Targamadze, inquired about the attitude of the Ministry of Internal Affairs towards the Special Task Forces. According to the Prime Minister, he himself was the biggest supporter of the Special Task Forces while serving as the Minister of Internal Affairs. Gharibashvili addressed Givi Targamadze with the following statement:  “You represent the previous government which incarcerated my family member and kept him imprisoned illegally. Just like him, you have put 300,000 persons on trial over nine years. Your regime represented some neo-fascist formation.”

On 2 December 2013, in an interview with Russia Today

journalist, Sopo Shevardnadze, Irakli Gharibashvili also declared:  “The National Movement is not capable of healthy criticism. Their democracy was only a facade focused upon deception. They have carried out a legal prosecution against 300,000 people over nine years. I cannot peacefully accept their criticism, sabotage and lecturing on morale.”

inquired about the number of people “put on trial” during the governance of the United National Movement and whether or not the Prime Minister’s statement is actually true.

presumes that he is referring to bringing the accused to trial.

addressed the Supreme Court of Georgia and withdrew statistics of 2004-2013 about the criminal cases dealt by the Georgian Court. According to the information provided by the Supreme Court of Georgia, over these nine years (2004-2013) the Courts of First Instance of Georgia proceeded a total of 122,557 criminal cases against 148,682 individuals. The Court passed sentence to 145,027 individuals in 119,490 cases. The rest of the criminal cases have either been ceased, returned to the Prosecutor’s Office or a defendant was sentenced to compulsory treatment.

According to Paragraph 1 of Article 209 of the Criminal Procedure Code of Georgia, plea bargain can serve as a basis for bringing a verdict without a trial on merits. A total of 65,395 cases against 80,490 persons were finalised by the plea agreement. The rest of the 54,095 cases against 64,537 people were heard at merit trials. 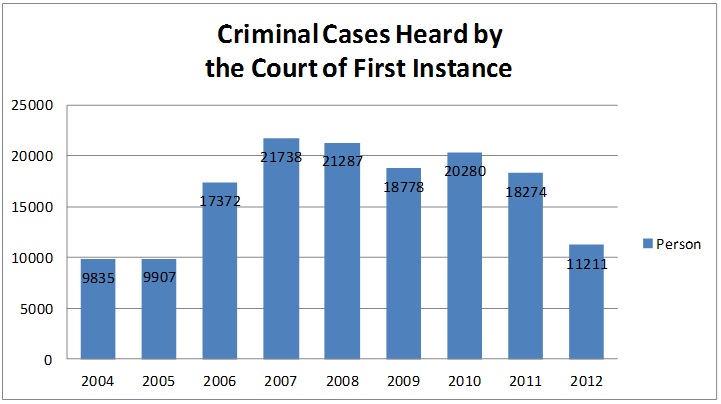 The Courts of First Instance heard 122,557 cases against 148,682 persons in the nine year period comprising 2004-2013. A part of these cases was either returned to the Prosecutor’s Office or the criminal cases were ceased or the defendants were sentenced to compulsory treatment. A part of the cases were finalised with a plea bargain or the verdict was brought based upon merit trial.

As becomes evident, the number provided by the Supreme Court does not coincide with the number of 300,000 given by the Prime Minister. FactCheck takes into consideration the context of the statement, which implies that the this number of criminal cases is very high for our country. In order to compare the situation in Georgia with that of other states, we used the data

of the United Nations Office on Drugs and Crime (UNODC) providing the number of persons who were accused by the prosecutor’s office.

According to Article 208 of the Criminal Procedure Code of Georgia, a pre-trial sitting should be appointed no more than 60 days after a suspect is detained or accused. Any individual being accused will be put on trial if the criminal case is not ceased. In addition, no individual can be put in criminal court without being accused first. Therefore, the numbers of accused and criminal cases proceeded by the Courts of First Instance are somewhat equal. It is of note that the UNODC defines the rating based upon the calculations of accused per 100,000 population.

Georgia showed the highest rate in 2010 with 469.9 accused per 100,000 population. This number is rather high for Africa, Caribbean, Central and South American states. Therefore, we compared Georgia with other European states. 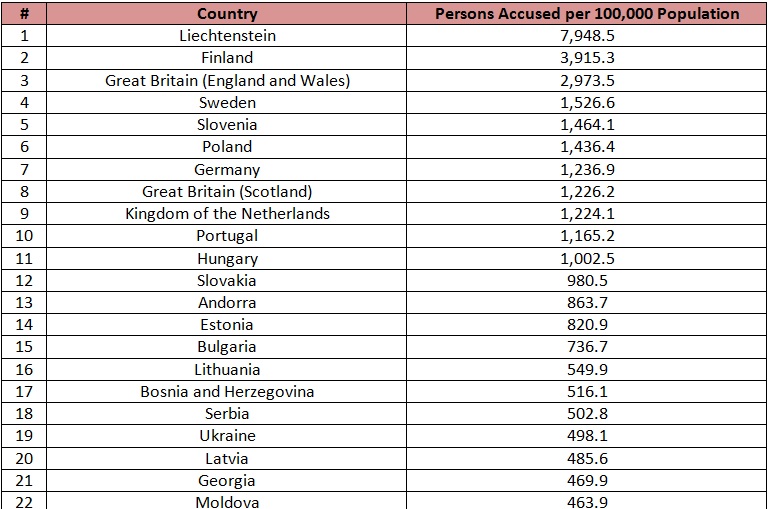 On the other hand, the high or low number of accused says nothing about the legal system of the country. The assessment of how the accused are actually convicted is of much more importance. Based upon the information obtained from the Supreme Court of Georgia, during the afore-stipulated nine years the Court convicted a total of 64,140 persons which comprises 99% of the merit trials. Those nine years were also distinguished by a very high number of inmates and inmate deaths; this issue has been previously covered by FactCheck.

These rates are indeed alarming, but the Prime Minister’s statement did not touch on this matter.  As we can see from the table above, as compared to other European states, the number of accused in Georgia is quite low. It is much higher in Great Britain, Germany, Sweden, Poland and the Netherlands.

Therefore, Irakli Gharibashvili’s statement, “You have put 300,000 persons on trial over nine years,” is FALSE.