Irakli Gharibashvili on the Christmas epistle and surrogacy

On 16 January 2014, during a press conference, the Prime Minister of Georgia was asked a question

On 16 January 2014, during a press conference, the Prime Minister of Georgia was asked a question regarding the Christmas epistle of the Catholicos-Patriarch of All Georgia. The question concerned whether or not Irakli Gharibashvili agrees on the Patriarch’s statement on abortion, artificial insemination and surrogacy. The Prime Minister’s response was as follows:  “Leading European states cannot agree on surrogacy. It is outlawed  in France, for instance.”

took interest in the accuracy of Irakli Gharibashvili’s statement.

Surrogacy is an arrangement in which a woman carries a child for the nine-month gestation period and delivers the child for another couple or person. There are two types of surrogacy:  traditional and gestational. In a traditional surrogacy, the child is conceived through the egg cell of a surrogate mother while in a gestational surrogacy, a surrogate mother is genetically unrelated to the child.

The regulations about surrogacy and related issues are complicated for the legislation. First of all, there are problems with the execution of the agreement on surrogacy as well as with resolving disputes over these agreements. Additionally, dispute may arise around the question of who is the child’s real parent. The issues of citizenship and immigration are also controversial.

Owing to the abovementioned problems, different countries have various legislative regulations in respect to surrogacy. The Civil Code of France was amended in 1994 by adding Paragraph 7 to Article 16 of the Code. The current Paragraph forbids surrogacy in any form or aim. According to the Paragraph, any agreement foreseeing to fertilise or carry out another women’s child is invalid. The French Court of Cassation discussed the issue of surrogacy in 1991 before the law was amended.  According to the Court’s decision, a couple making an arrangement with a third person to carry out and give birth to a child for them will not have the right to adopt the child. The Court of Cassation of France based the abovementioned decision upon Articles 6 and 1128 of the Civil Code. According to Article 6, statutes relating to public policy and morals may not be derogated from by private agreements. According to Article 1128, only things which may be the subject matter of legal transactions between private individuals may be the object of agreements. Thus, based upon the court practice and the legislative regulations, surrogacy is prohibited in France.

Similar to France, surrogacy is illegal in Germany as well. According to Paragraph 7 of Article 1 of Section 1 of the Embryo Protection Act, surrogacy is an illegal use of reproduction technology. The Adoption Placement Act bans surrogacy. According to Section 14 of the current Act, the administrative offence is deemed to both; that is, surrogate mothers or ordering parents. A doctor who performs the placement of a surrogate mother will be punished by imprisonment of up to one year or by a fine.

Unlike the abovementioned countries, Great Britain has a different approach to the subject. Article 2 of the Surrogacy Arrangements Act prohibits surrogacy upon a commercial basis. Commercial surrogacy is an arrangement when a couple gives a payment to the surrogate mother. According to the Human Fertilisation and Embryology Act, no surrogacy arrangement is enforceable by or against any of the persons making it. A surrogate mother has a legal right to be a parent to her child despite being genetically unrelated. 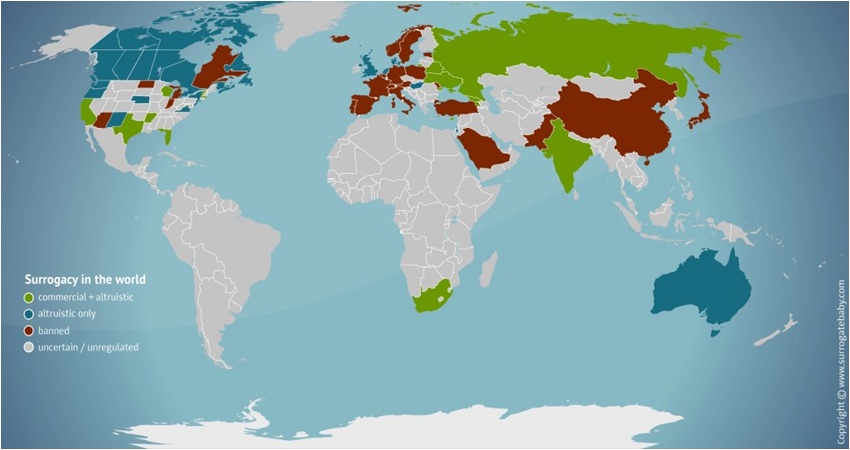 Despite the Prime Minister’s statement about surrogacy being correct, the question put forward by the journalist concerned abortion, surrogacy and artificial insemination. Irakli Gharibashvili commented only upon one issue from all of the abovementioned. In addition, the journalist was seeking the Prime Minister’s comments on the attitude of the epistle towards abortion, artificial insemination and surrogacy; however, Gharibashvili avoided doing so.

The Christmas epistle of the Catholicos-Patriarch of All Georgia, Ilia II, underlined that children delivered by surrogate mothers cannot be happy while children born by means of artificial insemination are doomed to being problematic. Expressing opinion in such a form was followed by a reasonable public indignation. In spite of the fact that the Prime Minister has not expressed his personal opinion in this respect, he referred to international practice, although only in regard to surrogacy. Of note is the fact that even the countries forbidding surrogacy are doing so not because of the problems with the further development of a child. In several European countries, surrogacy is prohibited due to the number of problems connected with the execution of the surrogacy agreement.

Conclusion As becomes clear from the abovementioned, there is no common European practice towards surrogacy. The majority of Western European states prohibit both commercial and non-commercial surrogacy. Surrogacy has been forbidden in France since 1994. Consequently, the Prime Minister is right in this part of his statement. However, as in this case we deal with an issue of such importance, FactCheck

could not limit its research to checking the accuracy of this sheer fact alone while disregarding other significant circumstances as well as the overall context.

First of all, the journalist’s question sought the personal position of the Prime Minister with regard to surrogacy, artificial insemination and abortion. Gharibashvili did not even mention two of the three topics from the journalist’s question; moreover, he avoided stating his own attitude towards surrogacy as well as commenting upon the said epistle. As readers may remember, the original evaluation of the abovementioned epistle by the Prime Minister was as follows:  “Interesting, deep and meaningful.” Therefore, the journalist’s inquiry about Gharibashvili’s stand on the particularly sensitive issues discussed in the epistle is perfectly reasonable. FactCheck believes that several of the aspects from the epistle go far beyond the boundaries of merely the church manifesting its stand on a particular matter and should become the subject of a much broader discussion. Naturally, the position of the Prime Minister is of high importance in this case. In particular, we are referring to the section of the epistle which discusses children born through surrogacy and artificial insemination and straightforwardly questions the possibility of happiness for those families which raise these children. The epistle also describes these children as being doomed to “loveless lives, homelessness and loneliness,” which entails a threat of stigmatisation for the children as well as their families. Accordingly, FactCheck

decided to turn aside its usual style and declare that Prime Minister’s response, in which he evades revealing his own attitude towards this issue and evaluates the subject only from the technical side, is simply wrong.

Herewith, we would like to underline once again the fact that the majority of European states prohibits surrogacy not because of the forthcoming misery of children born by surrogate mothers and their families but primarily due to the legislative difficulties related to the regulation of such arrangements.

Based upon all of the aforementioned, and taking into consideration the rather superficial response of the Prime Minister to this extremely important topic as well as the witnessed negligence towards the sensitive issues, we conclude that Irakli Gharibashvili’s statement is HALF TRUE.