“The budget saw a growth of 261 million lari but, unfortunately, this is not a real growth. Budget revenues are, in fact, decreasing by 42.7 million lari and the growth was achieved due to a loan in the amount of 1,132 million.”

Delivering a speech at the plenary session of the Parliament of Georgia on 14 November 2013, the MP

True
The statement is accurate and nothing is missing
Facebook Linkedin Twitter Print
Delivering a speech at the plenary session of the Parliament of Georgia on 14 November 2013, the MP from the United National Movement, Vakhtang Lemonjava, discussed the 2014 state budget and stated:  “The budget saw a growth of 261 million lari but, unfortunately, this is not a real growth. Budget revenues are, in fact, decreasing by 42.7 million lari

and the growth was achieved due to a loan in the amount of 1,132 million.”

set out to verify the accuracy of these indicated facts and checked the MP’s allegations regarding the delusive growth of the state budget.

As the MP made the given statement on 14 November, his assertions are based upon the second version of the 2014 draft budget and so our further analysis will revolve around the same document. 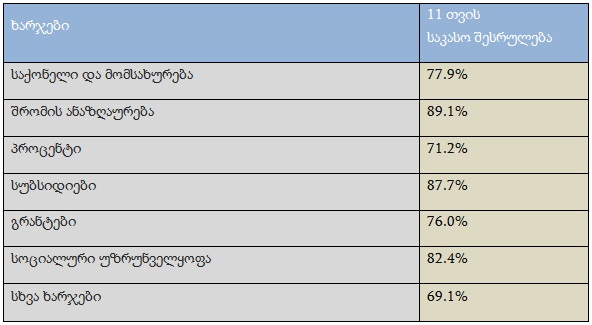 As gathered from the table shown above, according to the 2014 draft state budget, budget receipts amounted to GEL 8,661,800 thousand while in the plan of 2013 the same indicator is at GEL 8,425,500 thousand. These indices clearly demonstrate a growth of 236 million in the budget of 2014 which is 25 million less than the 261 million named by the MP.

The data given in the table also shows that the budget revenues are projected to amount to GEL 7,379,800 thousand in 2014 while the plan of 2013 sets the same indicator at 7,422,500. Consequently, a decrease of 42.7 million is observed in the state budget revenues of 2014. The size of the decrease is equivalent to the figure indicated by the MP.

The indices also demonstrate that the draft budget of 2014 forecasts the government debt to grow by GEL 1,132 million. This number has been correctly indicated by the deputy as well. It is also to be noted that out of the total GEL 1,132 million, GEL 732 million comes from the external debt while GEL 400 million represents the domestic debt. 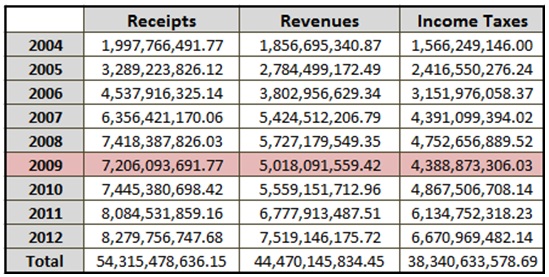 As can be gathered from the table, revenues were characterised by the tendency of an increase starting from 2004 with the only exception being the year 2009 (the aftermath of the Georgian-Russian war).

The third and final version of the 2014 draft budget is also not to be overlooked in our analysis. The document defines the receipts of 2014 to amount to GEL 9,105 million instead of GEL 8,662 million as forecast in the second version. This figure surpasses the same indicator of 2013 by GEL 680 million. In line with the third version of the document, the budget revenues measure up to GEL 7,319 million which fall behind the indicator projected for 2013 by GEL 104 million. As for the government bills of 2014, instead of GEL 1,132 million, the document places the indicator at GEL 1,636 million which exceeds the figure for 2013 by GEL 768 million. Accordingly, pursuant to the final version of the budget, the growth of 680 million in the 2014 state budget is the result of the GEL 768 million loan taken by the government. This finding once again confirms the allegation of loans being the primary cause for the budget growth.

According to MP Vakhtang Lemonjava, the growth observed in the budget of 2014 was delusive as it was not caused by economic growth. Our research established that in 2014 (pursuant to the second version of the draft budget) the state budget is projected to grow by 236 million. The budget revenues are to decrease by GEL 42.7 million. This decrease gains in importance in light of the fact that budget revenues have been characterised by a tendency of an increase ever since 2004 (exclusive of 2009 due to the impact of the Georgian-Russian war). We also found that the rise in budget receipts was mainly caused by the increase in government bills and, therefore, it follows that the budget is expanding owing to additional loans and not economic growth.

Consequently, we conclude that Vakhtang Lemonjava’s statement: “The budget saw a growth of 261 million lari but, unfortunately, this is not a real growth. Budget revenues are, in fact, decreasing by 42.7 million lari and the growth was achieved due to a loan in the amount of 1,132 million,” is TRUE.