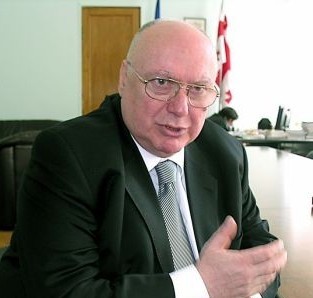 “Expenditures of the Ministry of Regional Development and Infrastructure of Georgia amounted to 223 million lari in the first two quarters of 2013, exceeding expenditures of the same period of the last year by 21 million 700 thousand lari.”

At the economic debates held in the Parliament of Georgia on 1 October 2013, Zurab Tkemaladze,

Mostly True
The application is accurate, but requires additional information and/or definition
Facebook Linkedin Twitter Print
At the economic debates held in the Parliament of Georgia on 1 October 2013, Zurab Tkemaladze, representative of the Majority, took note of the existing economic situation in the country and discussed future plans with regard to the issue. He touched upon the matter of direct foreign investments flowing into the country, trade turnover, the tourism sector and, among others, the work of the Ministry of Regional Development and Infrastructure. According to the MP: “In only six months of 2013, the cash execution of expenditures of the Ministry of Regional Development and Infrastructure of Georgia amounted to 223 million lari, exceeding the expenditures of the same period of the last year by 21 million 700 thousand lari. The expenses incurred by the construction of the high-speed motorway are also to be considered as they amounted to 84 million 338 thousand lari

in six months of 2013, surpassing the funds allocated for this purpose in the corresponding period of the last year by 36%. The Ministry plans the construction of the 111 km-long motorway of which an over 40 km-long section is to be opened to traffic in 2013whereas in 2012, only 1.5 km of the motorway was opened and the construction activity of the high-speed motorway comprised only 77 kilometres. Let us compare 1.5 against 40 km and see how big of a difference is between them.”

set out to verify whether or not the expenditures and the planned high-speed motorway projects of the Ministry of Regional Development and Infrastructure of Georgia of 2013 were indeed outweighing those of 2012.

In accordance with the budget of the Government of Georgia of 2013, payments (expenses, growth of financial and nonfinancial assets and the reduction of liabilities) with a total value of GEL 901 million were earmarked for the Ministry of Regional Development and Infrastructure while, according to the initial budget of 2012, payments totalled GEL 960 million. It is to be mentioned that the 2012 Law on Budget has undergone changes on four occasions; therefore, the figure for the abovementioned payments was varying accordingly. In line with the final adjusted plan of 2012, the payments allocated to the Ministry of Regional Development and Infrastructure of Georgia amounted to GEL 767 million and at the end of the year the cash execution of expenditures for 12 months totalled GEL 655 million. 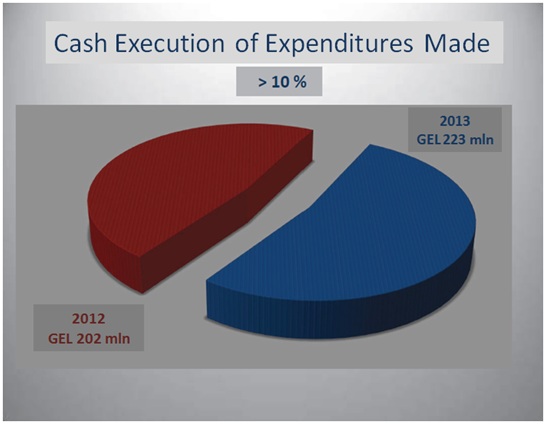 data for the last three quarters still has not been published), the cash execution of expenditures in two quarters of 2013 equalled GEL 223 million while in 2012 the same indicator was at GEL 202 million. These are the exact figures as indicated by the MP in his statement.

The above chart, taken from the same report detailing the six month budget execution, demonstrates that in two quarters of 2013 funds allocated for the construction of the high-speed motorway reached GEL 84 million while in the same period of 2012 the funds totalled GEL 62 million. As seen from the data, the expenditures made in 2013 exceed those of the same period of 2012 by 36% which again confirms the figures noted by the MP in his statement. 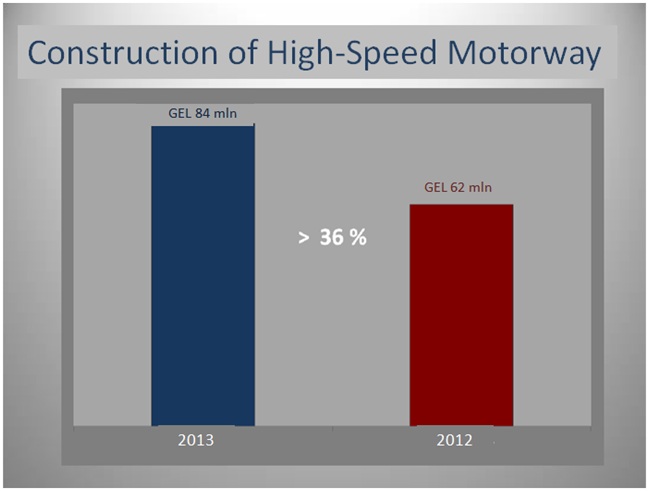 The data presented in the graph above is taken from the Six Month Report of Budget Execution of the Ministry of Regional Development and Infrastructure of Georgia. As illustrated by the graph, construction activity on the high-speed motorway reached 111 km (construction activity indicates the number of kilometres of motorway under construction) in the first six months of 2013 while in the same period of 2012 the indicator was at 77 kilometres. The data demonstrates that in 2012 a section of the motorway with a length of 1.45 kilometres was opened to traffic while the plan envisages the opening of a 51.7km-long portion of the motorway in 2013. At first glance, this observation proves the superiority of the 2013 plan to that of 2012 but this assumption is not entirely accurate. 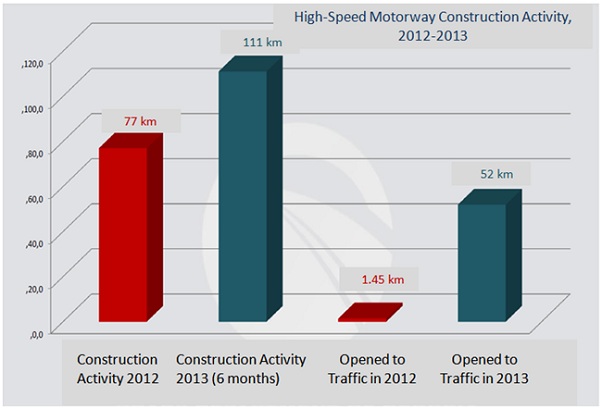 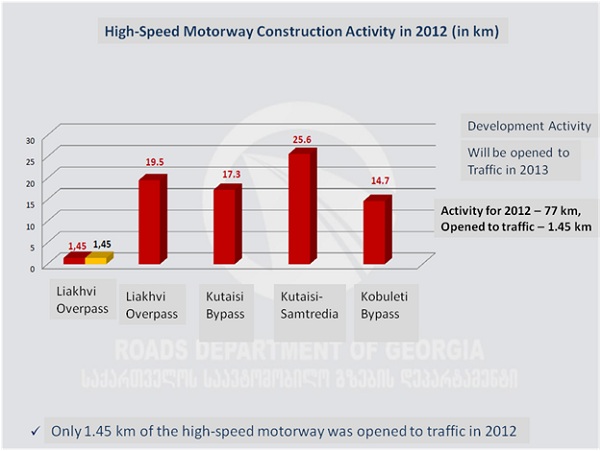 Regarding 2013, the graph above reports that the motorway is to be opened to traffic on the following sections: Ruisi-Agara – 8 km, Kutaisi Bypass – 17.3 km, Kutaisi-Samtredia – 14.0 km and Kobuleti Bypass – 12.4 km. In total the above-listed sections add up to 51.7 km.

One notable circumstance is to be considered in this context, however. Specifically, based upon the data of January-June, construction work was underway on all of the sections which are to be opened in 2013. The project simply envisaged the completion of work on those sections for 2013. Aiming to verify the abovementioned information we spoke to the former Minister of Regional Development and Infrastructure, Ramaz Nikolaishvili, as well as to the Head of the Road Development and Resettlement Unit at the Ministry, Bezhan Minjoraia. As stated by Minjoraia, construction on the abovementioned sections was initiated in different periods: Ruisi-Agara section – December of 2012, Kutaisi Bypass – December of 2011 (although, practical work – in 2012), Kutaisi-Samtredia – July of 2012 and Kobuleti Bypass – officially in 2011 (although practical work – in 2012). As can be seen, work on all sections was initiated mainly in 2012. Ramaz Nikolaishvili also confirmed that the work had been started prior to 2013. 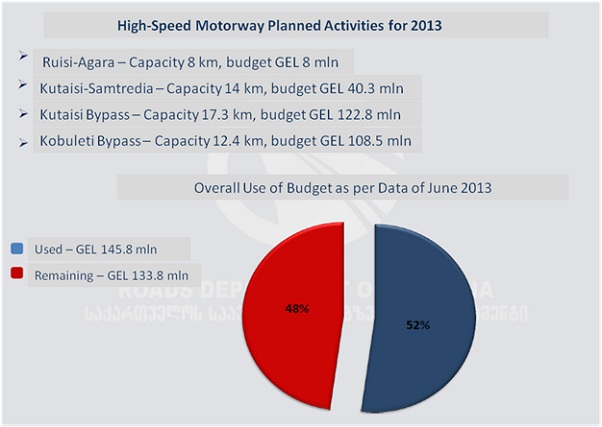 In line with the data given above, the funds allocated for the opening of a 51.7 km-long section amount to GEL 279.6 million. As planned, GEL 145.8 million have already been spent by June 2013 of which GEL 84 million aredesignated for the period January-June of 2013: on the Ruisi-Agara section – GEL 4 million, on the Kobuleti Bypass – GEL 17 million and on the Zestaponi-Kutaisi-Samtredia section – GEL 50 million. From those 84 million, the remaining GEL 13 million were employed for various activities linked to these major projects. Therefore, the expense of the work performed in 2012 equalled a total of GEL 62 million (145.8-84=61.8). This is the exact sum spent in the first two quarters of 2012. Based upon these calculations we conclude that no work was performed in the third and fourth quarters of 2012 which could have been due to the specifications of the work to be performed and certain seasonal limitations. According to the data provided by the Ministry, at this stage, of the planned 51.7 km, only the Kobuleti Bypass, comprising 12.4 km, has been opened. Consequently, 39.3 km are still remaining. As reported by Minjoraia, however, presently all the major activities which could have been hindered by seasonal complications have already been completed and, therefore, the mentioned seasonal limitations should no longer impede the completion of the work. Accordingly, we can suppose that the outstanding work of GEL 133.8 million will be completed by the end of the year.

At the economic debates held in the Parliament of Georgia on 1 October 2013, Majority member, Zurab Tkemaladze, spoke about the expenditures and the planned high-speed motorway projects of the Ministry of Regional Development and Infrastructure of Georgia of 2013 surpassing those of 2012. Our research revealed that the expenditures of the Ministry of Regional Development and Infrastructure in the first two quarters of 2013 amounted to GEL 223 million whereas in the same period of 2012 the expenditures were at GEL 202 million. In the first six months of 2013 the expenses incurred by the construction of high-speed motorways totalled GEL 84 million which is 36% higher than in the similar period of 2012. This data confirms the figures mentioned by the MP.

We also established that in 2013 the construction activity on the high-speed motorway entails 111 km whereas in 2012 the indicator equalled 77 km. The plan of 2013 foresees the opening of 51.7 km of the motorway while in 2012 only a 1.45 km-long section was opened to traffic. These figures also correspond to those indicated by the MP but they still do not necessarily entail the superiority of 2013 relative to 2012. Activities which are to be completed in 2013 were already initiated in 2012 and a substantial part of the work was also performed following the design of the project to be completed in 2013.

Accordingly, we conclude that Zurab Tkemaladze’s statement regarding the comparative superiority of the expenditures and the planned high-speed motorway projects of the Ministry of Regional Development and Infrastructure of Georgia of 2013 relative to those of 2012 is MOSTLY TRUE.